The 2019 International Day of Prayer for the Persecuted Church is Sunday, November 3rd.

Here is this year’s slide presentation from the event’s sponsor,
Voice of the Martyrs.
We’ve added music to the presentation, and hope you will join us in praying … every day … for the safety and protection of our Christian Brothers and Sisters around the world who are suffering for their faith … every day.

Sunday, Nov. 5, is the International Day of Prayer for the Persecuted Church (IDOP).
Churches across the United States and around the world will join in prayer for our persecuted brothers and sisters.

Here is the Voice of the Martyrs’ Slideshow Presentation, which churches will use to help inspire every Christian to pray for our persecuted family members.

The Video Slide Show includes ways we can pray for our persecuted Christian family.

We went in and added music to the Slide Show, and the Voice of the Martyrs’ address is at the end of the presentation.

How often we write of the freedoms we enjoy, and the price paid for our freedom. Let us pray for those who don’t have this freedom, and for those who persecute them.

Not just on Sunday, November 5th, but, as with our freedom, let us pray, every day, for those who don’t have freedom … to continue, every day, to “Remember them that are in bonds, as bound with them; and them which suffer adversity, as being yourselves also in
the body” (Hebrews 13:3)

Next Sunday, November 1st, has been designated as “International Day of Prayer for the Persecuted Church.”

I can’t implore you strongly enough to pray, every day, for our Brothers and Sisters in Christ, around the world, who are being persecuted for their faith in Jesus. I urge you to include these men, women, and children, and their families and churches, as part of your daily prayers.
We must, every day, heed the words of Hebrews 13:3:
“Remember them that are in bonds, as bound with them; [and] them which suffer adversity, as being yourselves also in the body.”

When we pray for those in prison for their faith, we must remember that the gospel came to us in letters written from jail.

Here’s a look at the facts, from The Ethics & Religious Liberty Commission:

“Christians are the most persecuted religious group worldwide. An average of at least 180 Christians around the world are killed each month for their faith. (Source: Open Doors USA)
Christians in more than 60 countries face persecution from their governments or surrounding neighbors simply because of their belief in Christ. (Source: U.S. Department of State)
One of the worst countries in the world for the persecution of Christians is North Korea. With the exception of four official state-controlled churches in Pyongyang, Christians in North Korea face the risk of detention in the prison camps, severe torture and, in some cases, execution for practicing their religious beliefs. North Koreans suspected of having contact with South Korean or other foreign missionaries in China, and those caught in possession of a Bible, have been known to be executed. (Source: Christian Solidarity Worldwide)
In 41 of the 50 worst nations for persecution, Christians are being persecuted by Islamic extremists. (Source: Open Doors).”

I’m going to share a couple of resources with you.
First, here is a video from “The Voice of the Martyrs” to promote this year’s International Prayer event. It is the true story of Pastor Pastor Suta. Please note that this is a true story, and parts of it are tough, but it will give a glimpse into just what our Christian Brothers and Sisters are facing, every day of their lives: 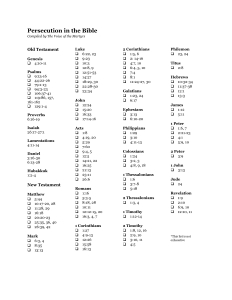 As we commit ourselves to pray, every day, for our persecuted Brothers and Sisters in Christ, to renew our goal and desire to “Remember them that are in bonds, as bound with them; and them which suffer adversity,” let us also remember the words of Pastor Suta, from the video:
“When you pray for the persecuted, please remember to also pray for those who persecute.”

Here is a special video we’d like to share, produced by “Gospel For Asia,” for the International Day of Prayer for the Persecuted Church 2013, coming up this Sunday, November 3.

Every day, believers around the world risk banishment, beatings, imprisonment and death to follow Christ and take His Gospel farther. Perseverance often seems impossible, but when the Lord enables believers to stand strong, He works mightily through their sufferings.

On November 3 (or any Sunday in November), join churches across the nation in lifting up the persecuted through unified prayer. Share this video with your congregation, and let them see how their prayers can strengthen believers and expand God’s kingdom into the most unreached places.

Our Own RSS Feeds!