From Thanksgiving 1861-Today: “The Vacant Chair”

Recently, to honor our Veterans, we shared the commercial entitled “The Empty Chair.”
I mentioned that there was a famous song from the Civil War which had the same name, and I would try to find the words for you. The classic Civil War poem and song was actually called “The Vacant Chair.” Here’s some information about the poem, and the song, which would eventually follow.

“The Vacant Chair” is a sentimental favorite from the Civil War, and it became not just popular, but immensely popular in both the North and the South, although there were different lyrics used by Union and Confederate troops. The message continues to be universal, focusing on the terrible losses of war at the most private and intimate level-the family gathered around the dinner table. In this particular case, the family was gathered around the Thanksgiving table, in November, 1861 … included at the table was a “vacant chair.”

“The Vacant Chair” was written to commemorate the death of John William Grout (1843–1861), a Union soldier from Worcester, Massachusetts, and an 1859 graduate of Phillips Academy in Andover. Mr. Grout, known as “Willie,” was a very popular local son, who served with the Union’s 15th Massachusetts as a Second Lieutenant, and was killed at age eighteen at the Battle of Ball’s Bluff, in October, 1861. Lt. Grout’s body was recovered from the Potomac River on November 5, 1861, after being washed 35 miles back to Washington, D.C. His remains were identified by the name written on his clothing. “The Battle of Ball’s Bluff” was a devastating battle for the families of the Worcester area. There were almost 500 killed, wounded or captured from the 15th Massachusetts regiment.

“The Vacant Chair” was written by Henry S. Washburn. Mr. Washburn was born in Providence, Rhode Island, on June 10, 1813, He spent his boyhood at Kingston, Massachusetts, and was educated at Worcester and Brown University. Later, he was a manufacturer at Worcester and Boston. Beginning in 1875, he was the President of the Union Mutual Life Insurance Co.,
and was very active in public affairs, where he held many prominent posts. He also wrote many hymns and songs, perhaps the most known hymn being “Let Every Heart Rejoice and Sing,” which was considered a “National Hymn.”

The melody for the poem “The Vacant Chair” was written in 1862 by George F. Root (1820-1895), who was a famous composer, and also known for other Civil War songs such as “The Battle Cry of Freedom,” “Just Before the Battle Mother,” and Tramp! Tramp! Tramp!”

Here now are the words to “The Vacant Chair.” Please keep in mind that many of the words were changed over the years, but this is as close to the original as I could find. The poem first appeared in the Worcester Spy around Thanksgiving 1861:

The Vacant Chair
We shall meet but we shall miss him.
There will be one vacant chair.
We shall linger to caress him,
While we breathe our ev’ning prayer.
When a year ago we gathered,
Joy was in his mild blue eye.
But a golden cord is severed.
And our hopes in ruin lie.

We shall meet, but we shall miss him.
There will be one vacant chair.
We shall linger to caress him,
While we breathe our ev’ning prayer.

At our fireside, sad and lonely,
Often will the bosom swell,
At remembrance of the story,
How our noble Willie fell.
How he strove to bear our banner,
Thro’ the thickest of the fight,
And uphold our country’s honor
In the strength of manhood’s might.

True they tell us wreaths of glory,
Evermore will deck his brow,
But this soothes the anguish only,
Sweeping o’er our heartstrings now.
Sleep today o’ early fallen,
In thy green and narrow bed.
Dirges from the pine and cypress
Mingle with the tears we shed.
Henry S. Washburn

I found this from the Massachusetts Historical Society: 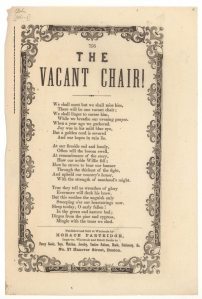 I wanted to include a video of the song being performed, as well.
There were many I found, some dating back to the early 1900’s.
However, I’ve shared this one, from more recent time, featuring Kathy Mattea.
Please enjoy … and think about … “The Vacant Chair”


Bless and Encourage Others By Sharing This: